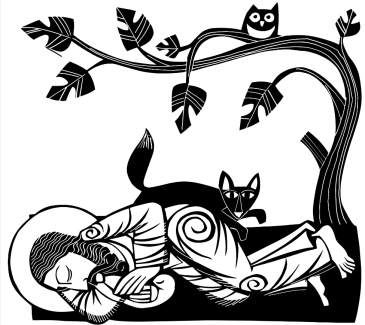 Picture yourself standing on top of a diving board.

You have stood on top of this diving board lots of times before today. You know the stairs that spiral up its hard column. The history of the divers who came before you is written on its treads in wet footprints. You know the railing which bends around the stair’s exterior, its paint flecked off by years of sun and by scores of chlorinated hands. And you know the very top. The flat place where the stairs end, a plain roughened with rubber paint and no-slip strips, calling you out to the edge where the railing ends and where nothing starts.

There is no actual board on this diving board. Just two slabs of concrete jutting out of the tower, a giant “F” at the end of the pool. Maybe it’s more of a diving platform. But, board or not, a diving board – the diving board – is what you and your friends call it.

You have stood on top of this diving board lots of times. What you have never done is jump off of it.

Previous visits to its summit have gotten you as far as the precipice. There, your friends watched as you stood dead still, your hand digging a hole in the railing, your gut turning with equal parts bravado and terror. There you were. Leaning out over the edge, measuring the drop, looking down at the water as though you were staring at it through a pair of binoculars turned backwards. It was impossibly, lethally far away.

Your friends would start to yell then. “Come on!” and “Jump!” Calling out your name, shouting questions. The lifeguard would glance up at you, an expression of impatience flashing in her eyes, her hand starting to reach for her megaphone. Even in the summer sun, the wind was cold.

And then there was the walk back down the stairs. Your embarrassed footprints the only ones facing backwards.

This is the history that you hold with you on top of the diving board.

You wouldn’t be up there today except for this kid. His hair is wild and there is something in his eyes that you can’t name. The two of you horsed around in the shallow end for a while, whipping volleyballs at each other’s heads, but then he was out, heading for the diving board. “Follow me,” he said. And you did.

Down the length of the pool, walking not running past the lifeguard, and then up those stairs. The kid moves fast, frenetic almost, climbing hard, past the lower tine of the “F,” up towards the summit. His words ricochet back down at you, fast and cryptic. You think you hear him say, “foxes have holes and birds have nests…”

And then you are at the top, three or four steps behind the kid. Nothing around you but the railing and the summer sky. Infinity.

The kid stops, sets his face to the board’s end. To glory and terror. He starts into his run.

“Forget your Dad,” he shouts. “Let your Dad call himself.”

And then, he is across the platform and off the precipice. He hangs there for a moment, suspended motionless in the air, high above the water. Wile E. Coyote. But there is no look of confusion on the kid’s face, no little sign in his hand. There are just his eyes. He turns his head and those eyes meet yours. “Follow me.” And then gravity is back and he is gone, down, into the water.

In that instant, a switch is thrown. You know that the wall that has held you back from the precipice, that has pushed you back down the spiral stairs all those other times, is gone. That you could follow him. You could just step off the end of the end of the board and into something new.

We spend a lot of time praying for change. For difficult colleagues or classmates or neighbours or fellow parishioners to disappear, for love to walk into our lives, for babies to be born, for the airplane flight or the movie or school to end, for the church to get its act together, for the new government to take office. For a chance. For the opportunity to follow Jesus. And then that change comes, Jesus walks into town, the new sheriff, the spurs on his sandals clinking on the dry and dusty road. And suddenly we’re not so sure. I mean, yes, Jesus, this is what I want. I want to follow you. But I didn’t think you were coming today.

The Son of God is a lot of things: healer, prophet, priest, preacher, symbol. But maybe most of all he is a teacher. Jesus is always teaching in one way or another. Today his teaching method is one that only the really great teachers can pull off: he is being righteously, intemperately impatient. He is giving us that rare and difficult gift of listening to our list of reasons why we can’t take a risk, and calling BS.

The hard thing is this: our reasons actually seem pretty good. Jesus, I’ve got a family, I’ve got a job, I’ve got responsibilities, I’ve got to finish plowing the field. I’ve got to bury my father. But Jesus is having none of it.

Let the dead bury their own dead. This makes a cas e for being the harshest thing that Jesus says to anyone in any of the Gospels. It is harsher than anything he says to Pilate. It rivals the time when he likens the Canaanite woman to a dog. It is hard to think of a modern paraphrase for Jesus’ statement that doesn’t involve using profanity.

I think Jesus is speaking like this because he knows that this young man doesn’t actually have a corpse waiting for him at home – that burying his father is something that is going to happen years or even decades in the future. That it is the young man’s reason for infinitely postponing his calling. For moving it into that box on his desk called “someday” which Jesus knows most often turns into “never.”

I’m pretty sure that Jesus knows all of this because I’ve actually had this conversation. I’ve been that young man, finding reasons to stay home where it’s safe. And I have had the gift of a mentor who has spoken to me harshly, who has told me to give my head a shake. Who has given me an unwelcome and entirely necessary push into the unknown and away from that dull tragedy which is the life unlived. I hated that teacher for speaking to me like that. I resented his words. And I’m grateful for them now. Maybe you’ve had one of those te achers, too.

The Israeli physicist, Moshe Feldenkrais, said that the world is full of people desperate for change, but on one condition: they don’t want anything to be different.

Feldenkrais named something fundamentally human with that line. Things can’t go on like this – in the economy, in the environment, maybe even in our lives. But, like the smoker thinking about quitting, we know that now isn’t the right time for change. Just a little while longer. I’ll change next week: it’s in my calendar. But not today. Never today.

Who do you think you are?

What are you afraid of?

We know that if we step off that boa d, something will shatter. Jumping is an ending, a kind of death. We will be changed. It is the ending of our certainty and of our fear. These things will be replaced with… what? We don’t know. A greater fear, one that we won’t be able to manage? A belly flop, like that kid we heard about one time, who hit the water sideways. He walked funny for a year. Or something else, something that we will find in the rush of the wind and in the immense mystery of water, coming at us fast.

Picture yourself standing on top of a diving board. You have stood on top of that diving board lots of times before today. But you have never jumped off of it.

The kid with the wild hair slowly swims away from where he landed, clearing the way for you. From where you are, way up above, it almost looks like he’s walking on the water.

He turns and looks at you with those eyes. Over the din of the pool, over all the shouting, you can just make out his words.